“I only wish Mark had spent more time making money rather than just writing about it”.

I am no Mark Twain.

I’m a tactical trader, so that’s my first purpose.

I’m not always going to take the time to write it out in a format I can share here.

I’ve been bolted to the chair this week but didn’t spend any time sharing my observations.

Instead, I encourage you to do what I did. I went back and reread some observations from January to see what I was seeing and thinking then.

How has sentiment changed?

How has the trend direction changed?

Has the narrative changed?

What didn’t we know then we do today?

Here’s what I read:

If you do this, you’ll see why.

Although many people mistakenly promote symmetry and balance as a good thing when it comes to investment management, this is another of many instances where asymmetry is preferred over symmetry.

If we balance our profit and loss, we make no progress.

So, I prefer profits over losses and profit greater than loss.

If we balance our risk and reward, we are left with no change.

So, I prefer asymmetry over symmetry: more reward, less risk, or asymmetric risk-reward.

Getting this wrong can be one of the biggest mistakes of your life. If you balance your portfolio, you’ll have periods of gains, but they may be followed by periods of losses and the losses are just enough to remove the gains. Asymmetric returns are achieved by capturing more of the good, less of the bad.

In the chart below, we can see the yield spread went negative in August. Since then, it has trended back up. The Yield Spread has become more asymmetric. 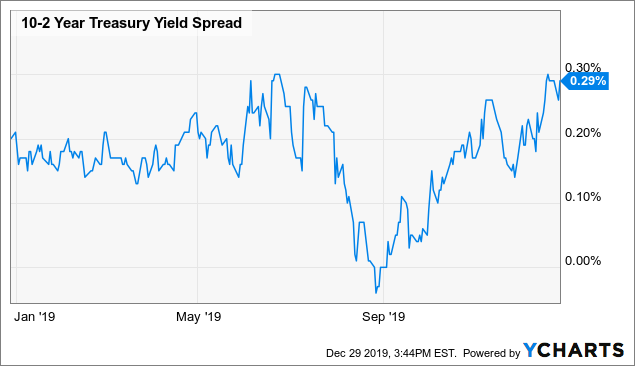 A negative 10-2 yield spread is historically considered a precursor to a recessionary period. So, symmetry is the first signal of an issue, then it turns negative. That’s why we saw these inverted yield curve headlines in August. Since yield curve inversions are scares, they get significant attention in the financial press. 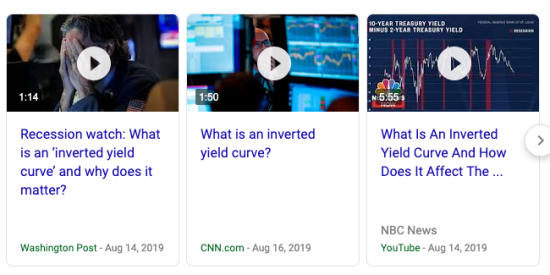 Typically, long-term bonds have higher yields than short-term bonds. An inverted yield curve is seen as an indicator of an impending recession. A negative 10-2 spread predicted every recession from 1955 to 2018 but occurred 6-24 months before the recession happened, so the inverted yield curve is a leading indicator that signals far in advance. The gray area labels recessions. You can see the Yield Spread drops to a low level before the recession. 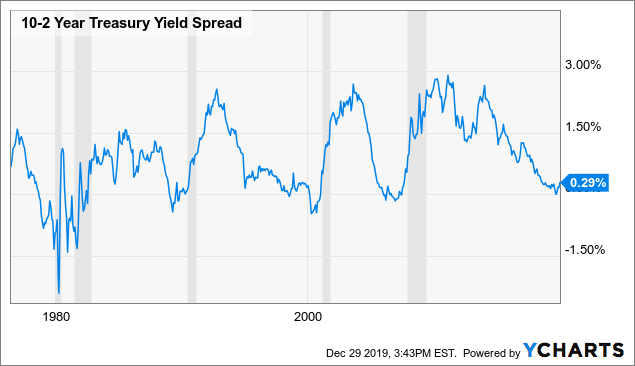 Although it isn’t currently inverted, we should take note it did invert briefly, and the spread is on the low range of its cycle historically We can see in the chart the inversion doesn’t necessarily stay flat or inverted for long. The signal, then, is the symmetry then the inversion.

The slope of the yield curve oscillates up and down with the state of the economy. The upward-sloping yield curve is observed when the economy is growing. When investors expect a recession, they also expect falling interest rates. The belief of the market that interest rates are going to fall drives the inversion. When the yield curve inverts, it’s because investors have low confidence in the economy over the near term. So, it’s an indicator of investor sentiment and behavior. Here is a visual of the historical rates between the 2 and 10 year. The 10 year should be materially higher as a reward for tying money up longer as is the case most of the time. 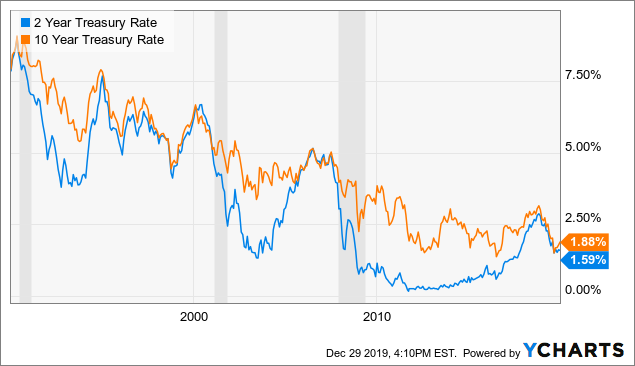 Only time will tell if the inversion in 2019 will precede a recession. All we know now is it’s a warning shot across the bow to pay attention to other leading economic indicators that precede the next stage of the business cycle.

But, the rate of change in interest rates is probably the most important leading indicator. Falling interest rates result in a lower cost of capital and liquidity for both consumers and businesses. When money is cheaper, we’re more likely to spend. We should be more inclined to buy a new $100,000 car at 2% than 4%. When interest rates rise, as they are now, we know the economy will eventually slow down as it costs more to borrow money to fund business projects or personal spending. As interest rates rise, people spend less. Since the cost of the loan literally rises, this happens whether they know what they are doing or not, since rising rates also means people and businesses can afford less debt. When rates rise, payments rise, so the amount they can borrow, which is based on income, reduces spending.

The yield curve inversion doesn’t automatically mean a recession is in the near future.

Employment is essential, too. The U.S. Unemployment Rate is about as low as it’s ever been. 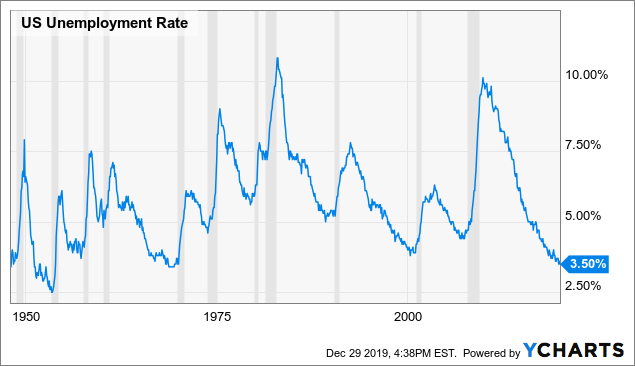 As with all cycles, it isn’t the extremely low level of the cycle we should focus on, but what’s more likely to happen next. It should be no surprise that low unemployment precedes recessions.

For me, the directional trend of the stock market will be my primary guide for the economy but I monitor many trends for situational awareness of what is going on.

Convexity captures the asymmetry in the connection between bond prices and changes in interest rates.

This asymmetry arises from the convex payoff pattern shown by the solid curved line in the chart below. 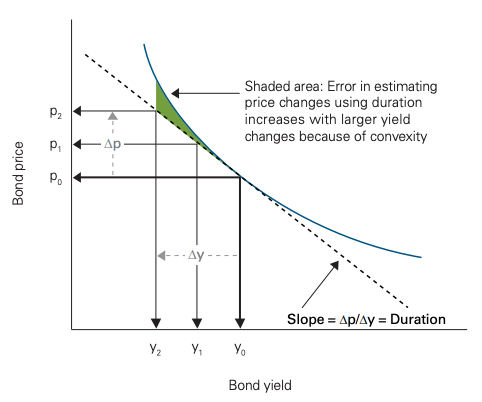 It plots the relationship between the yield of a bond and its price.

The dashed line estimates the consequence of a change in yield on the price of the bond.

This convex pattern also means a portion of the interest rate move continues uncaptured by duration.

Duration is a measure of interest rate risk and is mathematically derived from the slope of the dashed line.

Convexity is a measure of the degree of the curve in the correlation between bond prices and bond yields.