Realized Risk is the historically realized exposer to danger, harm, or loss

Realized is to become fully aware of something as a fact; understand clearly.

Risk is exposer to danger, harm, or loss.

True Risk is the historically true exposer to danger, harm, or loss

Actual Risk is the historically actual exposer to danger, harm, or loss

For example, investment risk is often understated by annualized return tables or standard deviation that excludes the drawdown. For example, below is a table that shows S&P 500 annual returns over different time periods, such as the last 10 years average annualized +9.6% and the last 15 years average annualized +10.2%. It leaves out the other side of the return profile necessary to understand the Risk/Reward Ratio. Presented by itself, the “Trailing Total Returns” table ignores the downside risk and drawdown the investor would have to endure to achieve the stated return. 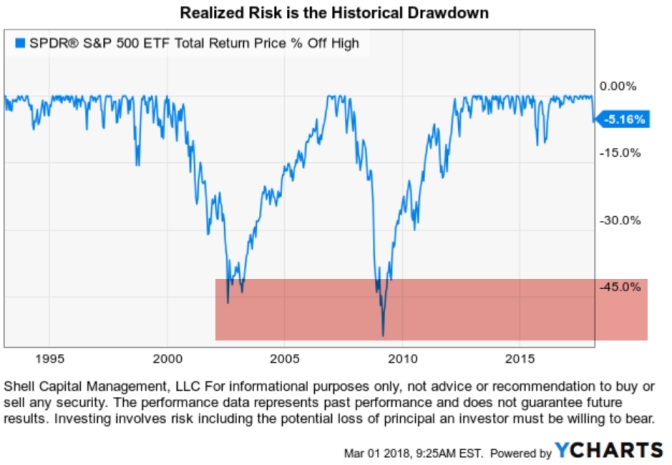 The fact that markets returns aren’t always positive and we don’t actually experience “average returns” is why we believe drawdown control is essential. At Shell Capital, we apply proprietary drawdown control systems designed to manage our downside risk at the portfolio level.