I have recently found myself reminiscing about the late 1990’s – specifically the grand euphoric year of 1999. If you aren’t sure why then maybe you aren’t paying attention. Sometimes not paying attention is a good thing if it prevents you from following a herd off a cliff.

The four most expensive words in the English language are “this time it’s different.” – John Templeton

Lately, I’ve been reminiscing about the tech stock bubble, the .com’s, and how the Nasdaq QQQ replaced the Dow Jones Industrial Average as the favorite index by 1999. Then there were all the infamous statements like “you don’t understand the New Economy”. We’ve been talking about the funny commercials from the baby trader to the college-age guy helping the mature executive start trading online, to “Be Bullish”.

Do you remember Stuart and Mr. P? Back in 1999, there were traditional “stockbrokers” who were registered with a brokerage firm, who bought and sold stocks, bonds, and options for individual and institutional clients. If you were a stockbroker back then, like I was, you probably remember it well. Online trading was the beginning of the end for the traditional “stockbroker” firms earning a $200 commission to buy or sell 100 shares. The great thing about the evolution of online trading is it lowered trading costs dramatically. For someone like me who wanted to be a tactical money manager anyway, that was a great thing. I embraced it and went on to start my investment management company. But the point of this observation is the investor sentiment in 1999. The video below is amazing to watch 20 years later. But what fascinates me the most is how it reminds me of today; different subjects, same sentiment.

That may remind you of some of the things we hear today.

Those type of commercials flooded the financial news and evening news channels in 1999. To be sure, below is a WSJ article printed about the “Let’s Light This Candle” ad on December 7, 1999. I’ll tell ya what… that’s about as close to the top as you can get.

So, I wondered, what happened to Stuart and Mr. P?

Stuart was helping Mr. P buy Kmart stock online. Kmart was then one of America’s leading discount retailers. The Kmart Corporation was the second largest U.S. discount retailer and major competitor to Walmart. Kmart filed for Chapter 11 bankruptcy protection in January 2002. Just two years after Stuart helped Mr. P buy shares online it filed for the largest ever retail bankruptcy.  Kmart was later bought by Sears, which is now a failing company. At least Mr. P was wise enough to only buy 100 shares, young Stuart wanted him to buy 500 shares! They had no position size method to determine how much to buy based on risk, which would include a predefined exit. It is unlikely Mr. P had a predefined exit in place to exit the stock to cut the loss short. During that time, investors were only thinking about what to buy. They rarely considered how and when to exit a stock with a small loss to avoid a larger loss. After such a strong bull market, who is thinking about the risk of loss?

For those of us who remember, in the late 1990’s most investors weren’t just buying the largest retailers – they were buying technology. In hindsight, that period is now referred to as the “tech boom” or “tech bubble”. That’s because almost everyone wanted to buy tech stocks. Literally, even the most conservative seniors were cashing out bank CD’s to buy tech stock.  And… I’m not even going to get into the .com stocks, most of which no longer exist from that time.

Those were the most popular sectors, aside from the actual Internet stocks. 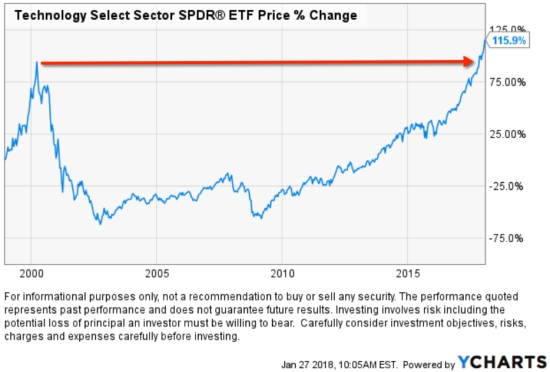 Below is what happened from December 9, 1999, when WSJ printed the article about the ad because it was so interesting and popular, to now. After nearly 20 years an investor buying the diversified tech sector would have just recently realized a profit, assuming they held on for 19 years. 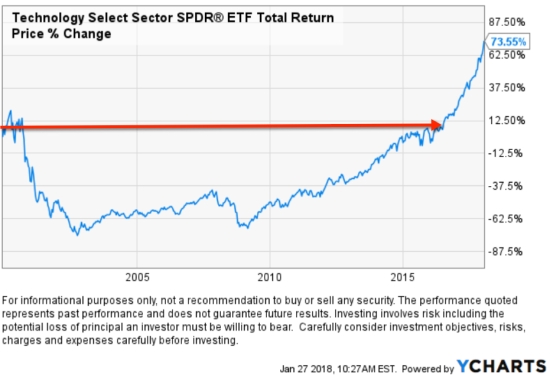 Here is what that -80% drawdown looked like that lasted 19 years. 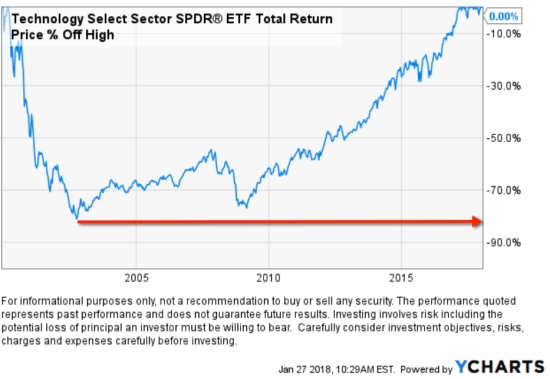 “Those who cannot remember the past are condemned to repeat it. “

This is a kickoff of a series of articles on this topic I have in queue on current global market conditions. Stay tuned…