I’ve shared some observations about investor sentiment this past week as sentient indicators and surveys have reached an extreme level of optimism.

When sentiment reaches an extreme, we should prepare for it to swing the other way, at least temporarily.

Because that’s what it does. Most financial and economic data cycles up and down, swinging like a pendulum as investors oscillate between fear and greed. Or, as I like to put it: oscillating between the fear of missing out and the fear of losing money.

What about consumer sentiment?

The US Index of Consumer Sentiment is another sentiment survey, but it measures consumers instead of specifically investor sentiment about the stock market trend. The US Index of Consumer Sentiment (ICS), as provided by University of Michigan, tracks consumer sentiment in the US, based on surveys on random samples of US households. The index aids in measuring consumer sentiments in personal finances, business conditions, among other topics. Historically, the index displays pessimism in consumers’ confidence during recessionary periods, and increased consumer confidence in expansionary periods.

US consumer sentiment is near the top of its historical range going back decades. There are only two times since its inception the level was high than it is now, such as the euphoric bubble of the late 1990s. 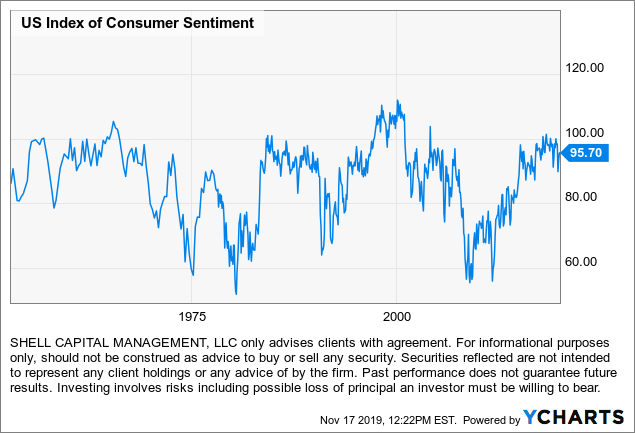 Consumer sentiment has been trending up the past decade until 2015 and has been drifting sideways at the historical peak range the past four years. 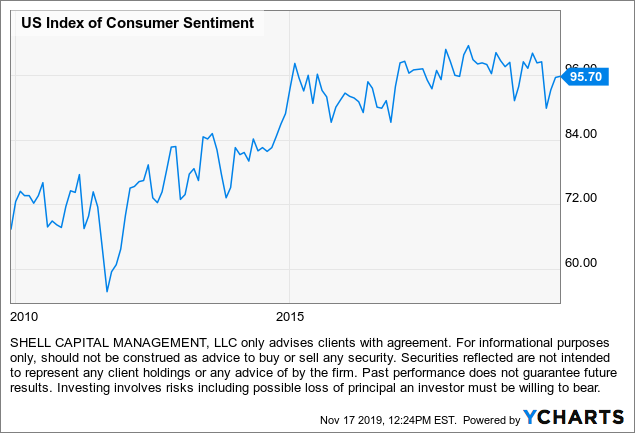 The art of contrary thinking suggests when everyone thinks alike, everyone is likely to be wrong. However, in recent years the crowd has been right. For example, US GDP (Gross Domestic Product) is the total value of goods produced and services provided in the US. It is an indicator to analyze the health of the US economy. GDP is calculated as the sum of Private Consumption, Gross Investment, Government Spending, and Net Exports. Two-quarters of consecutive negative real GDP growth is considered a recession. GDP is also used by the Fed (FOMC) as a gauge to make their interest rate decisions. In the post World War II boom years, US GDP grew as high as 26.80% in a year, but by the late 20th century 2-7% nominal growth was more the norm.

US GDP is at a current level of 21.53 trillion as of September, up from 21.34 trillion in the last quarter. This represents a quarterly annualized growth rate of 3.48%, compared to a long term average annualized growth rate of 6.26%. Although it shows the US economy has grown less than the long term average, the United States is now a developed country and long past the emerging country stage pre-WWII boom years. So, in the chart below we observe a correlation between consumer sentiment and GDP. Up until recently, they are trending in the same direction, but keep in mind GDP doesn’t necessarily have an upside limitation, while the consumer sentiment is a survey that can be more range-bound. Sentiment surveys tend to oscillate up and down in response to changing economic conditions. 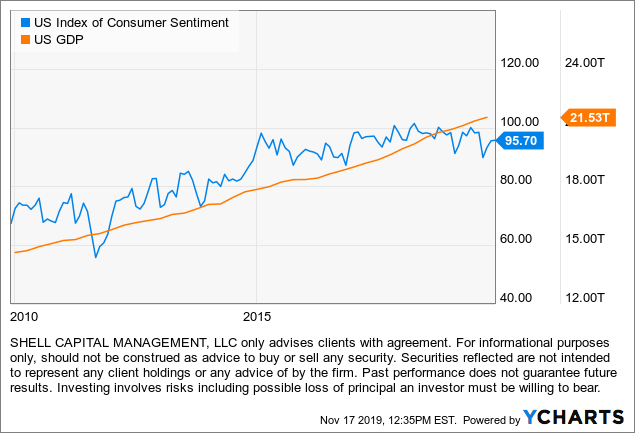 Another note about GDP before I get a thousand emails from my economics friends and other global macro funds managers, US Real GDP Growth is measured as the year over year change in the Gross Domestic Product in the US adjusted for inflation. To make my point and keep it simple, I used the base GDP.

So, how does overall consumer sentiment correlate with the stock market trend and how do they interact with each other? 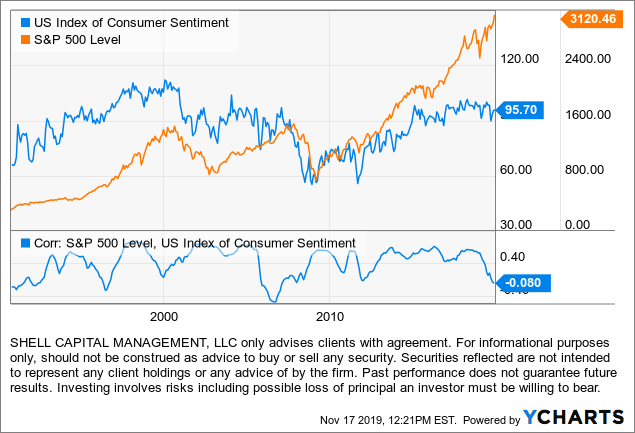 But, from around 2003 to 2008 it would appear consumer sentiment was non-trending as it drifted sideways as the stock market trended up, however, the sentiment was just staying at its peak level. When I highlight the peak range below, it’s more obvious that sentiment remains at a high level for years and occasionally swings down. Americans are mostly optimistic about America! and we should be. 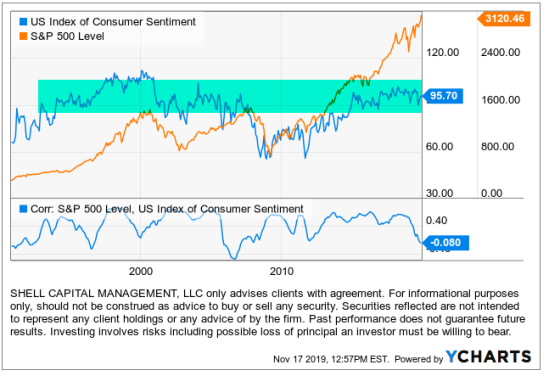 Continuing to review the trends, the period from 2007 on is correlated again to the downside as stocks and consumer sentiment dropped sharply. Recall this stock index declined -56% from October 2007 to March 2009 and then took four years to reach its 2007 high again in 2013. We can see the bottom chart above is the correlation coefficient of these two data. Although the correlation oscillates up and down, it has remained in the upper range signaling it is more correlated that not.

The larger declines in consumer sentiment are related to recessions. We’ve only had two recessions since 1991. The 1990s was the longest period of economic growth in American history. The collapse of the speculative dot-com bubble, a fall in business outlays and investments, and the September 11th attacks, brought the decade of growth to an end. Notwithstanding these major shocks, the recession was relatively brief and shallow compared to the one we would see seven years later. I marked the recessions in gray to show how they fit into the big picture. 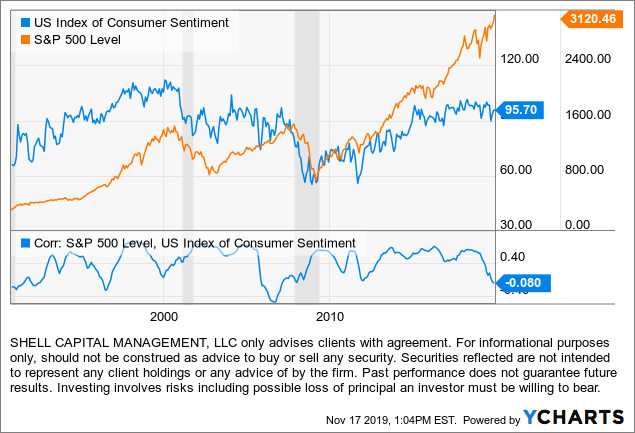 “As a general rule, it is foolish to do just what other people are doing, because there are almost sure to be too many people doing the same thing.”

—William Stanley Jevons (1 September 1835 – 13 August 1882) was an English economist and logician. Irving Fisher described Jevons’s book A General Mathematical Theory of Political Economy (1862) as the start of the mathematical method in economics.

This is really about human behavior.  Emotions and sentiment rise and fall with events.

To be a successful investor over the long term, we must necessarily believe, feel, and do differently than the masses at the extremes. So, I monitor the extremes to see when they change. At the extremes, I hope to be doing the opposite of what our investment management clients and everyone else believe I should be doing.

Mike Shell and Shell Capital Management, LLC is a registered investment advisor focused on asymmetric risk-reward and absolute return strategies and provides investment advice and portfolio management only to clients with a signed and executed investment management agreement. The observations shared on this website are for general information only and should not be construed as advice to buy or sell any security. Securities reflected are not intended to represent any client holdings or any recommendations made by the firm. Any opinions expressed may change as subsequent conditions change.  Do not make any investment decisions based on such information as it is subject to change. Investing involves risk, including the potential loss of principal an investor must be willing to bear. Past performance is no guarantee of future results. All information and data are deemed reliable but is not guaranteed and should be independently verified. The presence of this website on the Internet shall in no direct or indirect way raise an implication that Shell Capital Management, LLC is offering to sell or soliciting to sell advisory services to residents of any state in which the firm is not registered as an investment advisor. The use of this website is subject to its terms and conditions.