During holiday parties it seemed everyone was talking about how much the Dow Jones Industrial Average was “up” for the year. So, it is no surprise that the Dow is down -6.7% since the beginning of the new year. 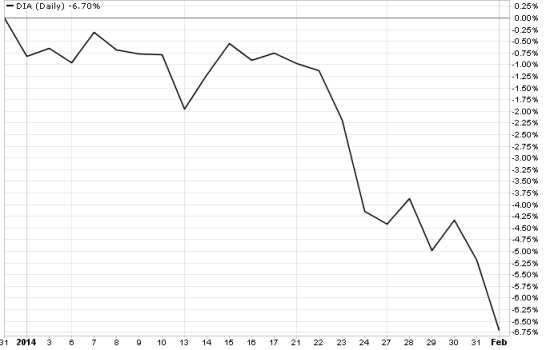 And, now that Dow is down -6.7%, investor sentiment measured by the Fear & Greed Index has shifted from greed as the return driver to Extreme Fear. Investor’s tend to get overly aggressive after prices advance and then afraid after prices fall. For example, a wealth manager told me in December that a client of his wanted to “shift to a more aggressive model’ because stocks had gone up so much. People tend to extrapolate the recent past, expecting it will continue into the future.

Though there seems to be signs the topping process may be underway, the stock market often trends the opposite of what investor’s expect, so I wouldn’t be surprised to see a reversal.