Many investment professionals admit they are unable to “time the market.”

Market timing is the strategy of making buy or sell decisions of financial assets (often stocks) by attempting to predict future market price movements. The prediction may be based on an outlook of market or economic conditions resulting from technical or fundamental analysis.

For example, someone recently said:

“A bear market is always preceded by an economic recession.”

That is far from the truth…

The most recent recession:

“On December 1, 2008, the National Bureau of Economic Research (NBER) declared that the United States entered a recession in December 2007, citing employment and production figures as well as the third quarter decline in GDP.”

In the meantime, the S&P 500 stock market index declined -48% as they waited. 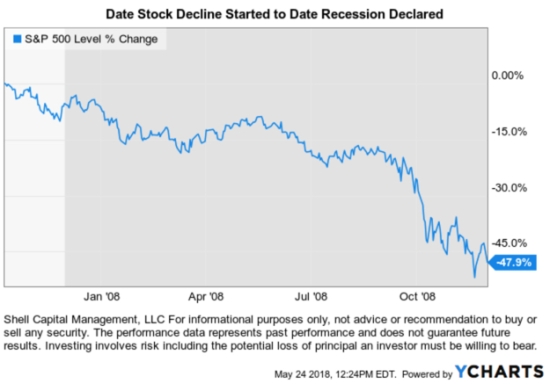 While the recession officially lasted from December 2007 to June 2009, it took several years for the economy to recover to pre-crisis levels of employment and output.

The stock market was below it’s October 2007 high for nearly six years. 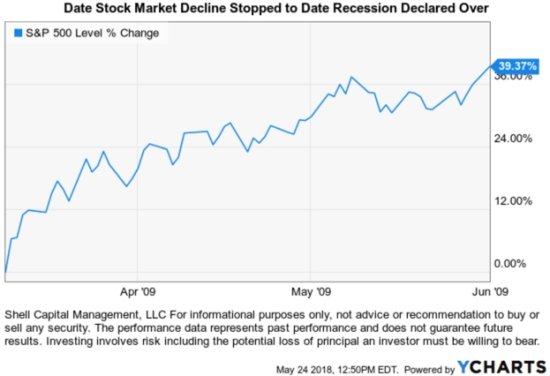 Don’t forget for years afterward the fear the economy will enter a double-dip recession.

If you do believe some of us can predict a coming stock market decline or recession, it doesn’t seem it’s going to be based on the economy. Waiting for economics and economic indicators to put a time stamp on it doesn’t seem to have enough predictive ability to “time the market” to avoid a crash.

I suggest the directional price trend of the stock market itself is a better indicator of the economy, not the other way around. Then, some other signals begin to warn in advance like a shot across the bow.

But, for me, it’s my risk management systems and drawdown controls that make all the difference.

Mike Shell is the Founder and Chief Investment Officer of Shell Capital Management, LLC, and the portfolio manager of ASYMMETRY® Managed Portfolios. Mike Shell and Shell Capital Management, LLC is a registered investment advisor focused on asymmetric risk-reward and absolute return strategies and provides investment advice and portfolio management only to clients with a signed and executed investment management agreement. The observations shared on this website are for general information only and should not be construed as investment advice to buy or sell any security. This information does not suggest in any way that any graph, chart, or formula offered can solely guide an investor as to which securities to buy or sell, or when to buy or sell them. Securities reflected are not intended to represent any client holdings or recommendations made by the firm. In the event any past specific recommendations are referred to inadvertently, a list of all recommendations made by the company within at least the prior one-year period may be furnished upon request. It should not be assumed that recommendations made in the future will be profitable or will equal the performance of the securities on the list. Any opinions expressed may change as subsequent conditions change. Please do not make any investment decisions based on such information, as it is not advice and is subject to change without notice. Investing involves risk, including the potential loss of principal an investor must be willing to bear. Past performance is no guarantee of future results. All information and data are deemed reliable but are not guaranteed and should be independently verified. The presence of this website on the Internet shall in no direct or indirect way raise an implication that Shell Capital Management, LLC is offering to sell or soliciting to sell advisory services to residents of any state in which the firm is not registered as an investment advisor. The views and opinions expressed in ASYMMETRY® Observations are those of the authors and do not necessarily reflect the position of Shell Capital Management, LLC. The use of this website is subject to its terms and conditions.