It has been over a week since Hurricane Irma came smashing through South Florida. Hurricane Irma was an extremely powerful and catastrophic Cape Verde type hurricane, the strongest observed in the Atlantic since Dean in 2007. I saved the radar image below on my phone. The yellow star is my home in Tampa Bay. Of course, we evacuated northwest to the spend a few days in Rosemary Beach in the panhandle. As Irma shifted more into the gulf, we drove on to Knoxville days in advance of her. Better safe than sorry.  We returned several days after she passed and fortunately, our neighbors were safe and our homes weren’t damaged in our area. However, many still were without power for a week. Our area is a new development, so our power lines are underground. We weren’t just lucky – we were better prepared. I’m not a fan of relying on luck to survive. 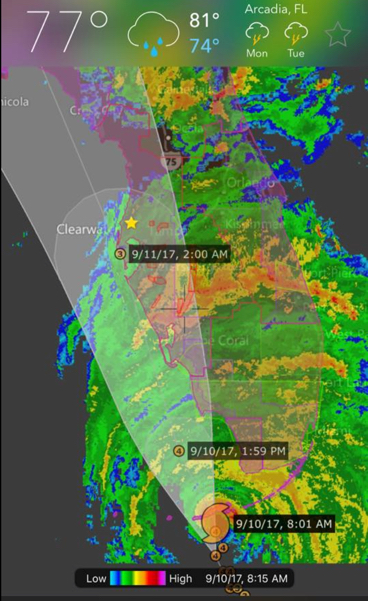 Hurricane Irma was a Category 5 Hurricane as she approached Florida. Irma was only two weeks after Hurricane Harvey caused severe damage to the Houston, Texas area.

This has been a very volatile hurricane season.

But, we can’t say the same about stock market volatility.

Amazingly, the U.S. stock market has remained resilient. In fact, the range of how much the prices have spread out has gotten tighter lately and the declines are smaller. We can see this in the chart below that shows % off highs of the S&P 500 stock index.

This is also reflected in the investor sentiment, which has once again become extended to the point of “Extreme Greed” on the Fear & Greed Index. This index uses several indicators to estimate investor fear and greed.

Calm and quiet periods are nice, but eventually, an inertia comes along and changes that trend. You would think two destructive hurricanes in two weeks would be that inertia, but investors in stocks aren’t shaken just yet.

In fact, below I drew a chart of world market returns since Irma struck the United States. Generally, most of the markets are flat. Initially, most markets declined, but overall “safe assets” like U.S. Treasuries, Gold, and Real Estate Investment Trusts actually declined around -2% since Irma. 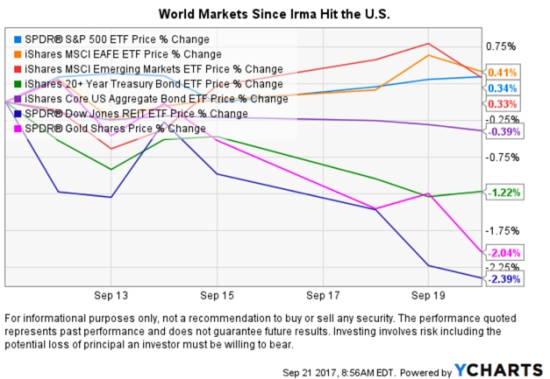 Cash has been as good as anything since that period – and with no risk.

We shouldn’t be surprised to see a meaningful decline at some point and prices trending in a wider range.