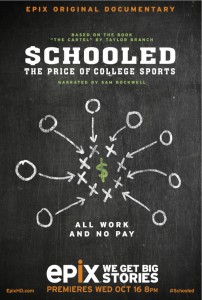 Not all asymmetric payoffs are fair. As the college football season gets into full speed, college sports gets some unwanted publicity. It was sickening to hear Arian Foster say:

“I called my coach and I said, ‘Coach, we don’t have no food. We don’t have no money. We’re hungry. Either you give us some food, or I’m gonna go do something stupid.’ He came down and he brought like 50 tacos for like four or five of us. Which is an NCAA violation. [laughs] But then, I walk up to the facility and I see my coach pull up in a brand new Lexus.” — Arian Foster

It’s sickening not so much because the coach broke the rules by feeding a player, but instead that someone who works as hard as a student athlete is sitting there hungry in the United States of America. And, while the college sports “industry” earns billions of dollars in profits. You surely don’t have to be a hardcore Libertarian to see the problem with that. It’s no surprise that many college athletes don’t have financial support from their family. It’s time for universities to focus on how to at least be sure student athletes have food and decent living conditions. I think they earn it.

The conversation will get started when the documentary Schooled: The Price of College Sports premieres Wednesday October 16th 8PM on EPIX:

“The EPIX Original Documentary Schooled: The Price of College Sports is a comprehensive look at the business, history and culture of big-time college football and basketball in America. It is an adaptation of “The Cartel” by Pulitzer Prize Winning civil rights scholar Taylor Branch, and his October 2011 article in The Atlantic, “The Shame of College Sports.” Schooled presents a hard-hitting examination of the NCAA’s treatment of its athletes and amateurism in collegiate athletics; weaving interviews, archival and verité footage to tell a story of how college sports became a billion dollar industry built on the backs of athletes who are deprived of numerous rights.”