What a difference a year makes.

A year ago, global equity markets were in a waterfall decline that started in October 2018. 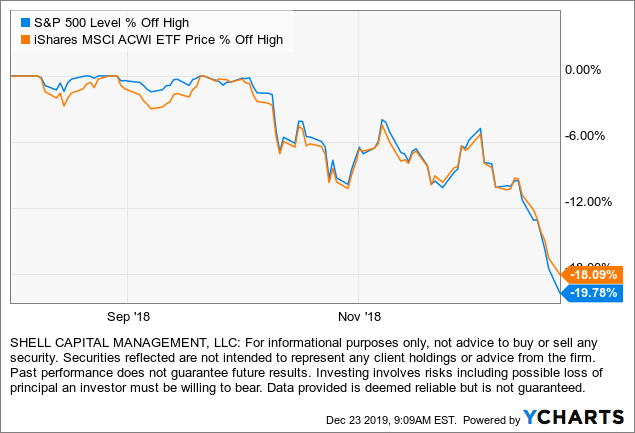 The S&P 500 stock index declined by nearly -20% and the MSCI ACWI Index fell -18%. The MSCI ACWI Index is MSCI’s flagship global equity index is designed to represent the performance of the full opportunity set of large- and mid-cap stocks across 23 developed and 26 emerging markets.

A financial advisor I know said:

“This is the worst Christmas of my life!”

I think he was serious.

After a euphoric period for stocks in 2017, it shouldn’t have been such a surprise if we are prepared for the trend to swing the other way, as it does.

I’m not sure of professionals in other industries experience the same level of trauma as a financial advisor. Most of my clients are Physicians and owners of companies, and as much as I know about their work, I can’t think of a similar scenario for facing a shock. It’s like a Physician or Dentist having all their patients really sick at the same time. So, I get it. In fact, it’s why we do what we do with active risk management and investor behavior modification.

The good news is, the markets didn’t get any sicker. Instead, Christmas Eve was the low, which, of course, we only know for sure in hindsight. But, as I shared on this date late year in “An exhaustive analysis of the U.S. stock market” the probably was in favor of reversal back up was high, so a year ago today was an asymmetric risk-reward setup and I traded it accordingly.

Investment management is probabilistic, never a sure thing.

Asymmetric risk-reward is the probability of the payoff vs. a loss, but more importantly the size of the potential payoff relative to the possibility of loss. For example, if we believe there is a 70% chance of a downtrend in a stock index that’s an asymmetric probably, but only an asymmetric payoff if the magnitude of the fall is greater than the magnitude of a possible gain. If we believe there is a 70% chance of a -5% decline, but a 30% chance of a +20% gain, the asymmetry is -3.5% on the downside and +6% on the upside, for a positive 2.5% expectation. Even though the upside was less probable, the expected payoff made it the better bet.

A year ago today, I shared this observation:

The bottom line is the stock market could certainly be entering another big bear market. It’s long overdue as this bull is very aged and overvalued. Even if it is, it will include swings up and down along the way. That’s the challenge for all strategies that trade or invest in stocks. For buy and hold investors, it’s a challenge as stocks swing up and down and they have full exposure all the time and unlimited downside risk. For tactical traders, the swings are a challenge as we increase and decrease our exposure to risk and reward and none of our methods are perfect. The key, for me, in dealing with it is to hold the lowest risk, highest potential reward exposure. Barring we don’t see some waterfall decline, most of the market is at a point we should see a countertrend move up at least temporarily. If prices keep trending down, I’m guessing the upswing that does come will be just as sharp.

After prices have fallen, I start looking for signs of a potential countertrend and it could come at any time.

Someday in the future, stock investors will be giddy again and completely forget about how they feel right now. But for now, the trend is down, but the sentiment and breadth are at such extremes we should be alert to see at least a short-term reversal in the days ahead.

The next day, on December 24, 2018, in “An exhaustive stock market analysis… continued” I shared:

After prices have declined, I look for indications that selling pressure may be getting more exhausted and driving prices to a low enough point to attract buying demand. That’s what it takes to reverse the trend.

I’ve been here before. I’ve executed through these hostile conditions as a tactical operator. The more hostile it gets, the more focused in the zone I get. After the stock market has already declined, I start looking for this kind of panic selling and extreme levels for a countertrend. We’re seeing those levels now. Sure, it could get worse, but we have reached a point that lower prices are more and more likely to result in a reversal back up.

Sure enough, those dates marked the low. Not because of the date or seasonality, but because of the stock market had gotten so washed out the selling pressure was exhausted. As I pointed out in the observations; those who wanted to sell had sold and eventually that panic selling dries up.

By May these indexes had recovered from their nearly -20% declines, so if you tapped out near the low, you missed out on the recovery. 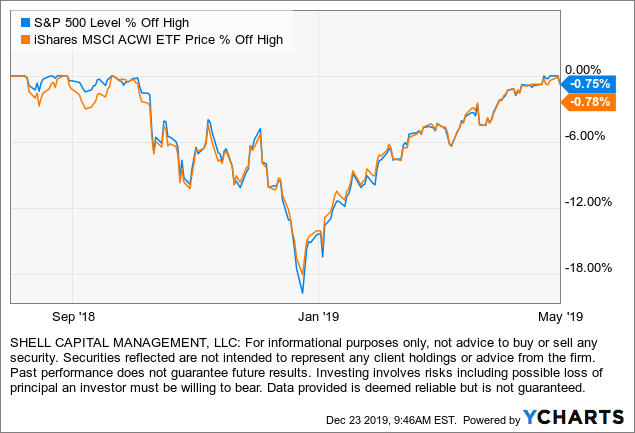 It doesn’t always work out this way. All -50% bear markets begin with a -10%, -20%, and -30% decline that continues to swing up and down on the way to the final low. A year ago was the worst stock market drop in a decade, but it could have gotten worse. If it had, it would have likely rebounded to retrace some of the loss, then resumed the downtrend again. An example is January 2000 to March 2001, which was a -20% decline and only the beginning of a much deeper, longer, bear market. 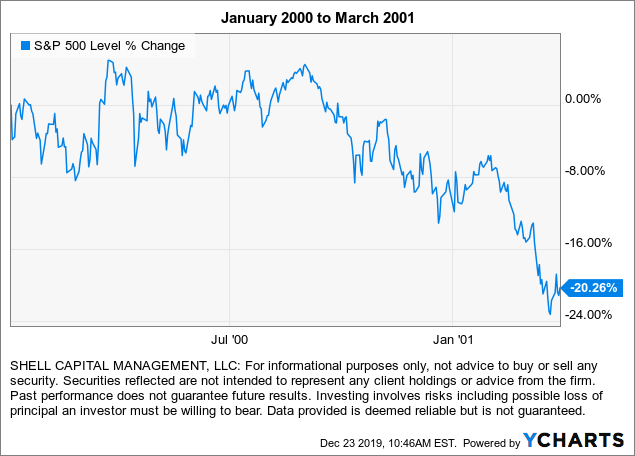 Those of use who operated in the bear market from 2000 to 2003 know how it unfolded. In the next chart, I added the NASDAQ Composite since by 2000, most investors were largely in NASDAQ listed tech and internet stocks. For them, it was a bloodbath. 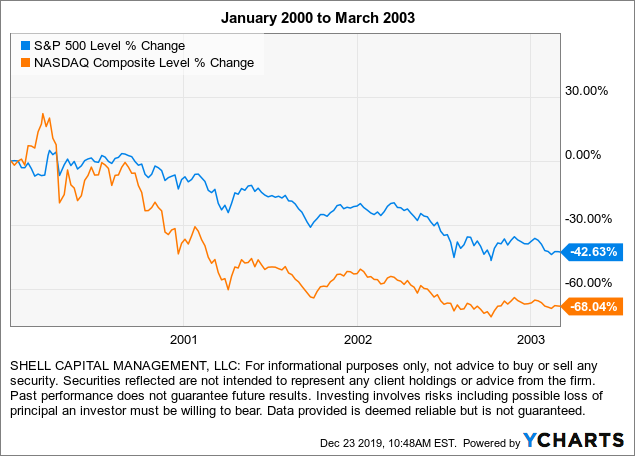 This is why I believe it’s essential to actively – manage- risk. Active risk management goes way beyond diversification and asset allocation to having predefined exits for every holding to stop the loss should it trend down and/or hedging.

Buy and hold indexes? Only if you have the stomach for it. You’d have to be willing to lose more after you’ve lost a lot, be very patient holding those losses and be able to afford the loss in capital to buy and hold indexes. 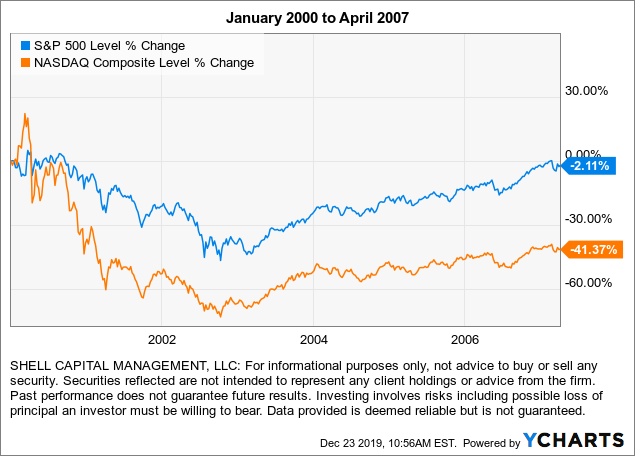 In fact, the truth about buy and hold is this experience. 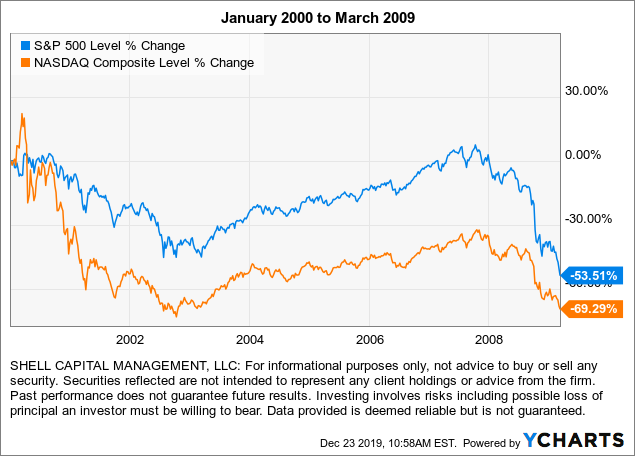 Oh, did I forget the dividends? The total return index isn’t much better; it’s -45% vs. -53% without dividends. 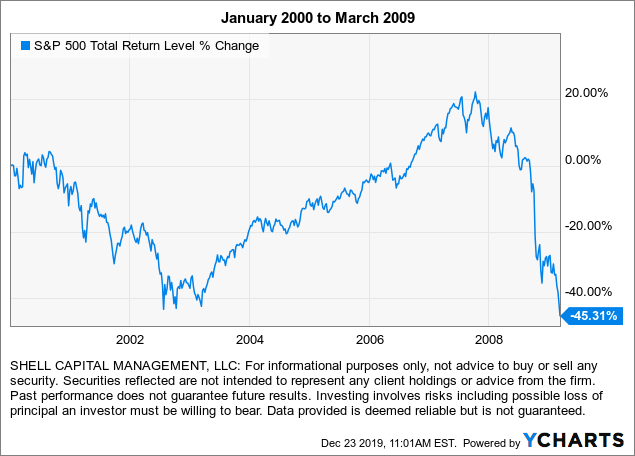 So, I’m not making light of a waterfall decline and certainly a year ago could have been the beginning of a much longer and deeper waterfall. Surely we’ll see one again someday in the future, so you had better know how to tactically shift and actively manage risk if you want to try to avoid it.

One more chart before I digress and get back to this past year. The NASDAQ was in a massive bear market for 15 years. It didn’t reach its 2000 level again until the end of 2015. 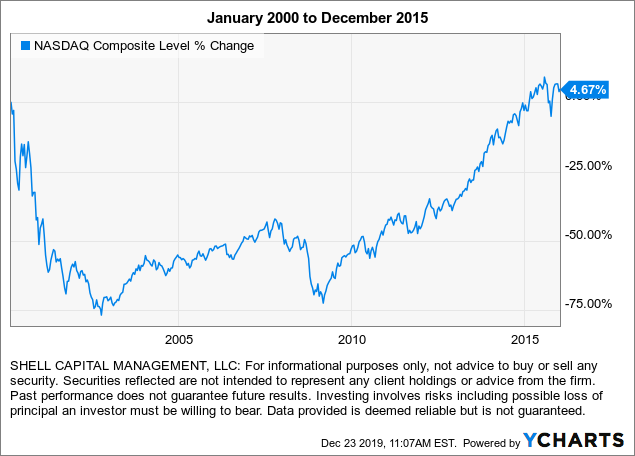 You can ask any stock investor you know who invested in the late 1990s if they didn’t hold mostly technology stocks by 2000. Here’s an image of the top 15 Nasdaq companies when the index peaked in 2000.

Many of these stocks don’t exist anymore.

Here is what Pensions & Investments wrote about it in 2015:

Among the largest 15 companies in the index back in 2000, only four remain in the top 15 today: Microsoft, Cisco, Intel and Qualcomm.

The composition of the Nasdaq Composite index has changed dramatically. In 2000, technology companies dominated its makeup by number of companies (64.9%), compared to 43.22% today. In 2000, telecom firms were the second-largest (11.8%), but only account for 0.83% of the index today. Consumer services (20.9%) and health care (16.2%) are the second- and third-largest industries by number of firms in the index today.

The point is; markets are dynamic. No matter how incredible the innovation and the craze for it, or how bad the waterfall decline, these things do pass.

That’s where I believe we can have an edge.

We don’t have to participate all in, all the time.

And, even if we don’t fully participate in an uptrend, it may be worth it if we avoided the downtrend. The math is still in our favor as we don’t need to capture as much gain if we avoid some loss.

“Those who cannot learn from history are doomed to repeat it.” –George Santayana

When the stock market is trending up with low volatility this time of year as it is now, it’s a good time to reflect on the past when things are in the opposite state. Of course, that is after being prepared for a reversal of the trend. This time last year was an astonishing time by any measure because of the speed of the drop in stock prices.

Rather than rehash it, I suggest reading these as I am this week:

I think you’ll be surprised at what you learn from such commentary written in real-time in the heat of the battle at a time like this when the markets are quietly trending into the new year.