Few investors have gotten as much media attention than Warren Buffett. He is considered to be the most famous investor in the world. Buffett is the chairman, CEO and largest shareholder of Berkshire Hathaway (BRK.A) and is consistently ranked among the world’s wealthiest people. He earned his money investing. Buffett is often referred to as the “Oracle of Omaha”. Plenty has been said about his performance over the decades.

Below is an interesting view of the Total Return (Price + Dividends) of his Berkshire Hathaway (BRK.A). The chart shows the “% off high” to see its drawdowns. A drawdown is how much a price trend declines from a previous high before it recovers the decline. Berkshire Hathaway (BRK.A) has so far declined -17.2% from its high. During the bear market 2007 to 2009 it declined -50%.

Though -10% declines are fairly common for stocks, 2011 was the last year that stocks declined more than -15% within the year. During 2011, Berkshire Hathaway (BRK.A) dropped about -23% before recovering and eventually trending to new highs. 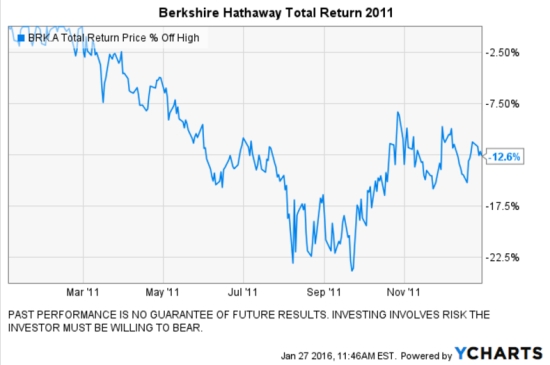 Warren Buffett is 85 years old and has been doing this a very long time. He certainly has some tolerance for stock market declines.

What do you think Warren Buffett is doing right now?